If you’re my age or older, you might remember things called video tapes. And, you might remember (not sure about US audiences here), a short, usually gritty style ‘advert’ about video piraters. They’d be sat in a dingy room somewhere, making copies of the latest film and then selling them on a market stall. And then, there’d be a booming male voice that said:

Joke. That just made me laught. What it actually said was: 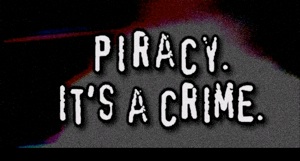 Let’s all be real here, pirating happens on the daily. Sites like Pirate Bay exist solely for this but I’m not about to wade into whether it’s wrong or right, justified or not. I always thought piracy was more about films and music, but this week, my friend, the lovely Brooke Harris, found her book on a book pirating site. I didn’t even know these things existed.

Of course, it’s easy to be biased. My book was free for five days and now it retails at 99c/77p – hardly bank breaking amounts. Would I be pissed off if it was being pirated on a website? Probably, yes. Was I shocked and disturbed when Brooke told us about what she’d found? Absolutely.

Writers know how hard it is to write. To take the simple idea of story and actually turn it into one. To flesh out characters, to say goodbye to your social life, husband, kids, whatever when that spark ignites. To try not to cry at editing or formatting. To get people to know your book exists and then to part ways with money for it. To deal with online trolls and bullies. But………

It’s less than a dollar or a pound. I mean, really? Back in the day, a video was a tenner. A CD more than that. But a kindle book from a self-published author?

I’m not sure I can overturn my bias on this one. And I don’t usually do bias.

What are your views? I’d love to know what everyone else thinks about it – I had zero idea that this kind of thing even happened. Maybe I’ve just lived a sheltered life!

And, do check out Brooke Harris and her sexy book, Rules of Harte. It’s super hot, probably NSFW unless you have a little bit of privacy and it won’t dent your bank balance  because right now, to take these piraters down to size, it’s free! I’m hoping to get her on for a guest blog post soon, too.